In this week’s Tidy Treasure Nicholson talks about a genuine act of human kindness.

I think of all the Tidy releases there is one that tops everyone that’s ever been.  Back in the mid 90’s I was down on my luck living in a doorway just off The Strand in the West End of London and I whilst homeless discovered a tape called ‘Retrospective of House’ which was mixed by a DJ I’d never heard of before named ‘Tony de Vit’. There were two other tapes in the pack which were mixed by Judge Jules and Seb Fontaine, but in my mind the TdV one blew both out of the water.

The latter were both pretty cheesy but were still fun to listen to nevertheless, yet Tony’s had an edge and an energy of which I had never heard before and I was sold, hook, line and sinker.  With that I set out to try and see him live and found out he was playing a guest set at a club in central London. Now don’t get me wrong.  I had no visions of grandeur in thinking I’d get in the club, back then, most clubs you needed smart dress and shoes to get in and all I had was the shell suit on my back and a pair of battered Reebok trainers, so I’d resigned myself to just hopefully catching a glimpse of him as he entered the club.  So there I was, milling around outside the large queue trying to get into the club and from the corner of my eye I saw him come round the corner heading toward the entrance.

“Tony!!” I shouted hoping he’d at least throw me a look and a smile, with that he turned, smiled and made a beeline straight for me.  Completely starstruck, I pulled out my tape that I mentioned earlier.  “What an amazing mix” I said.  “I must have listened to it a thousand times!” I said with a big cheesy grin on my face, “Thank you mate, means more than you realise” he replied whilst looking at me with his trademark infectious smile.

“You coming in?” he asked inquisitively beckoning toward to entrance.  I looked at him slightly embarrassed and replied “I don’t think so, all I have is what I’m wearing and also I don’t think they’d be accepting the homeless tonight, there’s a queue of well dressed punters with money to spend.  I’ve no chance.”  With that he patted me on the back and pointed at the aluminium record box next to him.  “Give me a hand with this would you?  Completely surprised I of course did what I was told, grabbed the box and he beckoned me to follow him.

As we got to the doormen, he told them who he was and said “|This young man is carrying my records tonight, you don’t have a problem with what he’s wearing do you?”  The head doorman looked a little bemused but said “You’re the headliner mate!”  And with that I followed him into the club, when we got to the hatch where you pay to get in he had a word with the woman behind and she gave him a big wedge of drinks tokens and two bands that would get us into the VIP, Tony handed me a band and the majority of the drinks tokens.  “I’m driving.” he grinned at me and we went into the club, so there was me.  Street fodder hanging around and chatting with one of the kindest most genuine superstar DJ’s of the mid 90’s and felt completely overwhelmed.  It was that day I became friends with Tony and also the day he became my hero.

We had a long chat before he went on the decks and did his thing, and he assured me that this wasn’t going to be my life forever, this was a chapter and if I had dreams then he should be living proof that you can do anything and achieve anything if you want it bad enough.  But moving on, it was a few years later that he released a track which was part of the Trade EP series that Tidy orchestrated, and it was sadly to be one of his last.  Of course that track can only be ‘The Dawn’, I remember him saying “I wanted to make something a bit like ‘Signum – What Ya Got For Me” but without the vocal and I wanted it to appeal to the hard crowds as well as the commercial so I gave it a heavy loop, tough kick and an off beat bounce to give that appeal.’

I’ll never forget the first time I heard it, it literally took me off my feet.  It wasn’t long after hearing it, I heard the devastating news that he had collapsed whilst on holiday and the dreaded HIV took him from us, I was truely heartbroken.  I’d lost my special friend and hero, it felt like my world had ended.  Yet everytime I hear that track it fills my heart with joy and reminds me of one of the greatest men and performers in my mind ever graced gods green earth, I will always miss him dearly and that track in my opinion is not only one of the very best Tidy has released in their 25 year journey, but one of the finest dance records ever made. 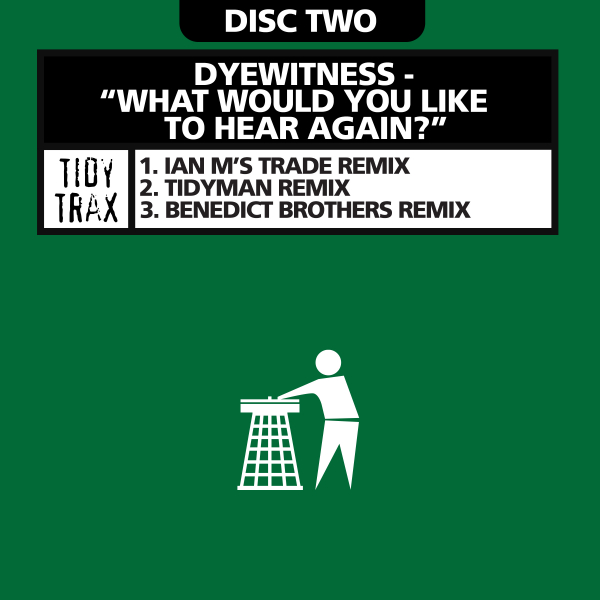